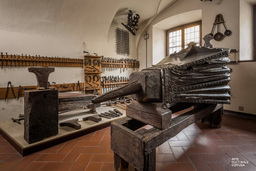 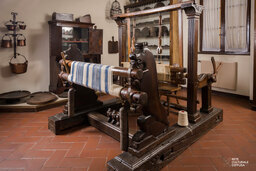 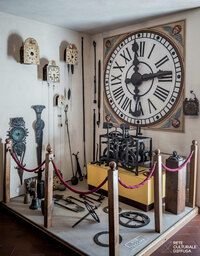 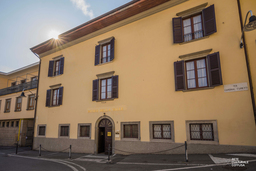 The museum is situated in a seventeen-century building in the storical centre of Zogno (n.3 Via Mazzini)
The building that preserves intact its primitive order, it had been bought by manifacture of "Vallle Brembana SPA".
At the beginning of 1900 that will give it to "Museo Della Valle"for express wisk of its president cav. Vincenzo Polli, older brother of the founder
The building was readapted, with the greatest respecte of its original structure, from civil residences's house to a house that can accomodate 12 espositive rooms (680mq)
There is a garden of about 1000 mq with a lovely quadriportico, under which ancient transports and primitive machines for the farm work.
Long time ago the building belonged to one of the branckes of the Sonzogni's family of Zogno in Brembana's valley know like "furia" - "furietti" from which the cardinal Giuseppe Alexander Furietti would be come down.
In the 1800 the house entertained the "Garibaldino" Pietro Volpi, one of the five patriots that joined " Spedizione dei Mille".
His redcoat is exposed in the museum

The ethnographic themes exibited
The etnographic themes are exibited in rooms. They are approximately 30 divided into about 70 sub-themes.
The themes represent the habits, the customs and the tradition of Brembana's valley.
The rooms taking the name of the main theme.
Room I - The Archaeological Section
Room II - The Iron
Room III - The Kitchen
Room IV - The Bedroom
Room V - The Agriculture
Room VI - The Casera
Room VII - The Clogs' Factory
Room VIII - The Inn
Room IX - The Domestic Tolls and The Working Tools
Room X - The Pasti' and The Knife Grinder
Room XI - The Loooms, The Lamps, The Clocks, The Puppet
Room XII - The Popular Religiosity
Some visitors have interpreted in a positive way the unusual appearance of the exposition that finish with the popular religiosity at the top of the 2nd floor. They think it means that the Brembana's people' religious sentiment pervade all the human activity
All theese years the primal exhibition structure has not suffered any change because any visitors have ever expressed different indications proof that the whole collection has been harmonious since the beginnings.
Whereas a frequent visitors' comment is the missing of the dialect name of the single topic or of the object and especially mention about his function.
The problems remains with all his difficulties to overcome but the Founder's spirit was and is that to elicit a strong emotions and a curiosity from the visitor.
In 1996 the Vallley's museum published the volume " Amare le Cose Perdute"carried out under responsability of Vittorio Polli.
The volume has 191 pages with about 250 color photographes.
The author handled all the themes infact all the publication can be considered as an illustrated catalogue.
For a moment the main object were made relived in their initial realities of the use