The Church Of Corpus Domini 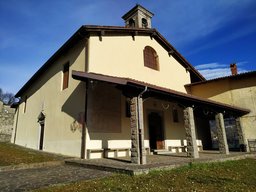 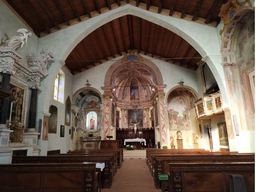 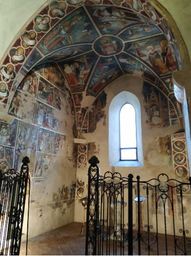 The only Parish Church in Bergamo with this glorious title since 10 June 1465, the date of its consecration.
Already before, there was an ancient oratory with an apse entirely frescoed, which only in 1948 was restored and today serves as a Baptismal Font with the walls and vault entirely frescoed by Maffiolo from Cazzano, in the second half of 1400. The present Church, which therefore incorporates the ancient apse, is arranged from North to South and was completed in 1494, as is confirmed by the date engraved on the lintel of the central door. On the East side there is a 16th Century door next to the bell tower and, at the top, a single lancet window in stone like the two clearly visible on the façade. On the internal pillars are visible the frescoes of St. Liberale and St. Bartolomeo on the left; of St. Pietro from Verona on the right, while the two pilasters next to the presbytery bear traces of frescoes ruined by stucco and plaster of the 16th and 17th Centuries. The carved wooden choir is a work of 1700, signed by a quondam Giov. Lazzaro.
The pulpit, now used as an ambo next to the altar, and the wallpaper cabinet in the sacristy as well as the kneeler on the right with the secretaires deserve attention. Next to the presbytery, on the left, the Madonna of Rosary altar, mentioned in a parchment dated Rome 1615. On the right side, the altar of St. Francis, since the whole building is in Franciscan style, is a hut: it is mentioned in a letter of the painter Lorenzo Lotto from Venice addressed to pre' Ieronimo Parish Priest from Pagliaro, but that the great artist would not have executed. On the ground floor of the present-day rectory of the 18th century is variously remodeled, there is still a fifteenth-century portico and two convent cells that suggest the existence of an ancient hermitage or convent. The churchyard preserves five tombstones with remains of bones.
St. Charles Bartholomew, archbishop of Milan, in September 1575 noted these tombs as an ancient cemetery through which there was direct access to the Parish House. The church has furnishings dating back to the 16th century. There is also a small gilded wooden icon with the effigy of a Byzantine style Madonna and Child waiting to be better positioned; a wooden statue of St. Rocco, one of St. Mary Magdalene and a small painted wooden temple that today serves as a tabernacle at the altar of St. Francis. At 350 meters, beyond the cemetery, on the road to Frerola, there is a small church dedicated to St. Charles Bartholomew, in the middle of the greenery and peace of the woods.