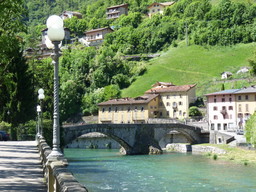 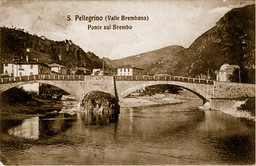 The St. Nicholas Bridge, called “Old” because it is the oldest bridge in San Pellegrino, was built between 1460 and 1470 at the same time as the monastery of the Hermits of St Augustine on the opposite side of the river in Piazzo Basso. It was active until 1652 when it was abolished by Pope Innocent X along with others with only a few monks. It was next to the church named after St Nicholas, which is still used for daily worship and especially for festivals in September. This side of the river, Piazzo Basso, was a separate community till 1914. The portico beside the church and the bridge (reduced from three to two arches after the floods of 1842) are the oldest remaining examples of masonry. They bear silent witness to 5 centuries of serious high water and flooding of the Brembo river, but also to the eventful history of San Pellegrino.