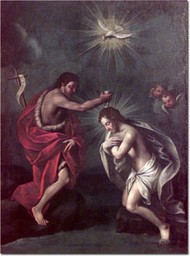 In the parish church you can see a Carlo Ceresa's painting (famous painter born in San Giovanni Bianco) "Baptism of Christ" - Oil on canvas, 125X29 cm. From Internet: tired and stiffen version of the Villa D'Adda's Baptism" says Vertova. In the painting the light highlights the Dove of Holy Spirit, Jesus who's about to receive the Baptism by John the Baptist whom doesn't bear the cross with the hands but it seems stick in the ground behind him.

Clock of bell tower
The bell tower of the church was built with a red porphyroid stone and it was built in 1795. The Castiglioni mechanic clock dates back to 1983 with gantry still timbered and jammed bells with old system. It's one of the last bell tower with fully manual clock which makes it absolutly unique of historical and artistic value in Lombardia. Defined by Luca Fiocchi member of Technical Commission for the bells of the diocesan administration, as a real living museum. Perfectly functioning, was restored to preserve a little assets for the future of our country.

Gerolamo Calvi and the organ Bossi of Piazzolo (based on Quaderni Brembani 9, by Centro Storico Culturale Valle Brembana, Roberto Boffelli).
Among the documents recently rediscover also the correspondence between Gerolamo Calvi and Adeodato Bossi, appointed by the Piazzolo's vestry to do the pipe organ for the parish church. A first draft, dated 12th of February 1840, was drawn up on letterhead: Pellegrino, Girolamo and Adeodato quondam Carlo pipe organs' Manufacturer and the brother priest Giuseppe - inhabitants in director Bergamo city in "Borgo Canale" contrada at number 20.
At the bottom there are a lot of information of Girolamo Calvi dated 2nd of June 1844.
The proof of his involvement in the commission for the construction of the pipe organ of Piazzolo is also in another certificate: “Modula del progetto del organo di Piazzolo pel Signor Maestro Girolamo Calvi“. This is dated 18th of June 1844 and as well as more details about the building, finishings and delivering, includes also a sketch of the swell box with the measure and is determined the price: 4000 austrian lira.
The Calvi's judgement seems decisive in a phrase which is before the signature's Adeodato Bossi. The pipe organ's construction was in 1845.