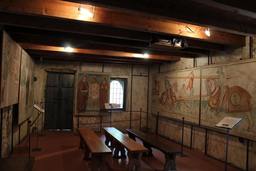 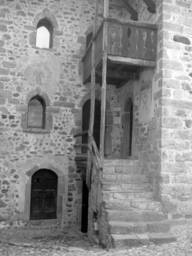 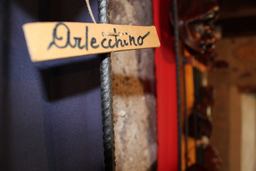 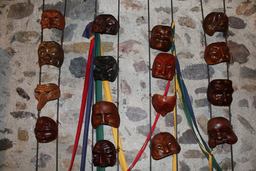 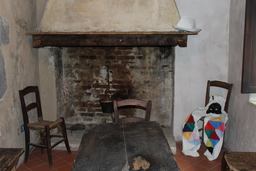 The village of Oneta is famed for the presence of ‘the House of the Harlequin” . In 15th Century the building was the residence of the nobel family Grataroli who boasted wealth and riches gained in Venice. According to tradition the house was home to Harlequin, the famous Bergamasque character from the commedia dell'arte.
The house is admired for its elegant lines, rounded portals and Gothic stone windows which open from the main facade. The entrance is accessed through the characteristic square and then a robust stone staircase on which a fresco represents a character dressed in firs, brandishing a club, the protector of the house. This disturbing character has been interpreted as the original Harlequin, a brutal wild man was in the popular imagination an expression of vitality rendered hard by the rigors of poverty. The museum is part of a cultural axis which includes the Mercatorum and Priula – migrant routes, artists, the Tasso family and the Harlequin. Guided tours are available via booking