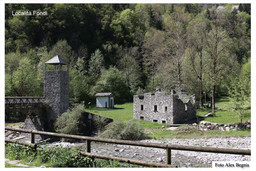 Fondi area, once was called "Of Smithies" because here, on the edge of the river there were smithies, mills, bakeries and workshops where they beated the wool, that the time fell and the river swamped, as the old bridge of Fondi destroyed by the flood of the 18 of July 1987.
Beyond the new Fondi brige you can see the ruins of an old mill, but especially the chapel of Fondi's dead that remember in the frescos on the walls the burial of the dead of the cyclicale pestilence. From Fondi a path get in Stralenna district and up to the high medieval viability that comes from Camerata Cornello.
Today the area is an organised green belt equipped with breaks and relax next to Brembo river and the old swiming-pool of grandparents in summer months.