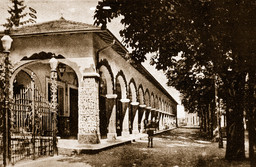 The lovely row of chestnut trees which provide fresh walks in the shade, are from 1852, the year in which the town council, not just private businessmen, began to improve the town’s appearance to please holidaymakers. No coincidence, then, that four years later a tourist tax was introduced. Also, the town was obliged to make good damage from the recurring floods during the 1800s. At the end of the avenue is the town hall. Its current form is the result of two major interventions. The first restoration at the beginning of the 1900s was by the architect Squadrelli, who also designed the Grand Hotel ,while the second was done in the 30s by the architect Angelini. The arcade was built in 1930 by the Colleoni family to make the spa more attractive by replacing the old wooden benches. The cement parapets along the river with their typically artistic iron candelabras are from the same period.