Church Of Saint Ludovico Of Tolosa 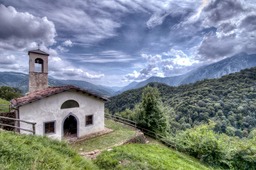 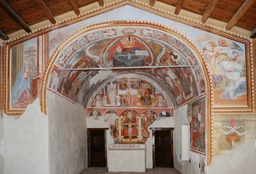 The history of the church is linked to a branch of the Tasso family who lived in Bretto. From 2007 the church underwent notable renovations which as well as securing the structure of the building brought to light three series of frescos from different periods. Towards the end of the 1400s and the beginning of the 1500s the church was enlarged and decorated upon the request of certain members of the Tasso family who considered it their property. The frescos were commissioned and represent devout memories, symbols of the everlasting devotion of the fresco’s commissioner towards his saintly protectors, evidence of his strength of faith. In this case it is the sacrifice of Christ which is seen as a central event in history and witnessed by the throne of grace and the crucifixion depicted on the wall of the apse. We also see the apocalyptic Christ who called himself ' light of the world ' and a mystical angel depicted in the vault of the presbytery . On the exterior of the church we can see the crests attributed to the family Tasso; a horn, an eagle and a tower which resemble the German families of Thurn and Taxis and bear witness to the awareness to the coats of arms used by the German branch of the family. The church is part of a cultural axis which includes the Mercatorum and Priula – migrant routes, artists, the Tasso family and the Harlequin