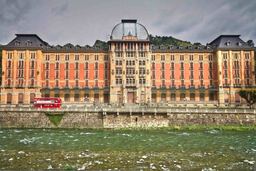 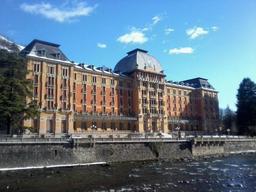 This large hotel, created by the architect Squadrelli and Commissioned by the Società Anonima delle Terme was opened in 1904. It is the first indication of San Pellegrino’s ambition, displaying its characteristic luxury, sophistication and international ambience. It closed at the end of the 70s. Many famous people from politics, culture and sport stayed here. Its luxurious rooms, great restaurant and avant-garde services made it a residence for the elite. To get an idea of what San Pellegrino Terme once was, it once had its own local newspaper circulated between 1901 and 1942, an exhibition of industrial art held in 1910, prizes for literature and poetry, political congresses and huge training camps. North of the Grand Hotel is one of the railway stations (the old line is now a cycle path), a rock-climbing cliff and a hydroelectric plant from the early 20th century.